The effectiveness of Gillette’s marketing strategy

In the world of marketing, there is probably no greater exemplar of effectiveness than Gillette. For more than a century, it has been at the pinnacle of brand management, marketing effectiveness and its stranglehold of the wet shave category particularly in America, is testament to just how well that brand has been run. One of the secrets to Gillette success is that every decade or so, it launches a new incremental product improvement – slightly better, slightly more expensive, slightly more profitable and it migrates the consumer from the previous model to the new model and moves onward. That was certainly the case back in 2005, when Gillette successfully migrated about 70% of the consumers that were using its previous lead model the Mac 3, across to the more advanced Gillette Fusion. And all was working to plan until the GFC hit. What the GFC did was introduce a new era of frugality especially to American men. Suddenly, the consumer and user of the Mach 3 was no longer upgrading to Fusion, in fact in many cases they were starting to downgrade to cheaper private-label razors in an attempt to save money. Gillette realized they had to do something. How could they get the consumer of the mach3 razor to continue to upgrade to fusion?

So they did some research, and they built a really quite detailed portrait of who that current Mach 3 user actually turned out to be. He was aged 18 to 34, low to middle income and he was obviously a Mach 3 loyalist. He over indexed it shopping at Walmart, he over indexed at enjoying and watching professional sports and he also plays video games. There was some clear attitudinal and behavioural metrics that also built a more colour into this portrait. He is not dissatisfied with his Mach 3 – he doesn’t love it but he sees nothing wrong with it. He believes that good enough is good enough when it comes to razor blades. He expects razor upgrades to be costly and probably not to be worthwhile, and he frankly is always in refill mode when he goes into the store. He has his brand Mach 3 and he’s looking for the cartridges, he’s not considering any form of change. His partner buys his blades about 40% of the time and she doesn’t want to interrupt the status-quo, though she would consider buying something as a present for him every now and again. Ultimately, he’s happy with where he is. So this was the challenge that Gillette faced, how do we get this man to upgrade and spend more on his razor? 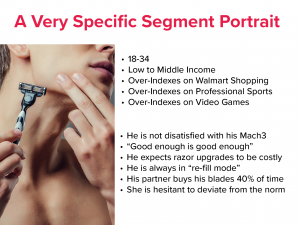 So, the strategy: convert Mach 3 users to Fusion. The target: this 18 – 35 year old Walmart shopping Mach 3 user. The position: look their best, play their best. The idea of tying into sports and video games are linked back to Gillette. The objectives – overall there was a three-stage plan to disrupt this current loyal cycle of refilling cartridges, then present something which has relevance to this consumer and that something which has ultimately value that will persuade him to upgrade. The ultimate objective was to convert Mach 3 users to Fusion, and increase Fusion’s market share at warmer as a result. So, thus the execution to deliver that strategy was really very innovative. Looking at the portrait of the consumer, Gillette realized that they could tie into both professional sports and video games by essentially offering a one-off special edition version of the Fusion which was linked to the local football team in that particular state. Here for example, the Dallas Cowboys, launched a limited edition version of Fusion. It was co-launched along with the most successful video game of 2010 which was Madden 10. The campaign itself to promote this limited-edition product was a combination of several different media.

First, there were print ads carried in the right target media for this particular consumer, things like Sports Illustrated. Next, we had radio ads which were very important about communicating to the consumer before they got to the actual supermarket that this offer was available and they should seek it out. And because radio is local, the 32 different teams and the 32 different promotions could be promoted differently. But this was a very digitally active consumer so on top of that, ecommerce, websites and banner ads were all extensively used as well to drive that consumer to wall at Walmart to seek out this limited-edition product. Finally, Google search advertising was placed so that if a consumer did begin to look into this product they were again driven to a Walmart store to make a purchase.

Once the consumer got in store, Gillette still had to convert them. That meant significant amounts of effort being spent in Walmart on point of purchase displays, but not just in the drug section of the Walmart. Clearly this was about interrupting the consumer, so even in the digital section of each Walmart there was a specific end cap that promoted not only Madden 10, but also the time with Gillette and the special edition razor. The results were spectacular and in the period that the campaign was running, there was an increase of 20% in Fusion sales inside Walmart. That’s doubly good news. First making Walmart happy is at the centre of most consumer goods brands in America, and second Walmart has such huge catchment that a 20% increase in Walmart carries enormous financial value across the whole country.

Rightfully this campaign was awarded a gold Effie in 2011. There’s a clear lesson here, you must understand the market and the segments within it but then clearly as Gillette did with their Madden tie-in, they also targeted very specific market segments. Think about the total market for potentially to buy wet shave razors and look at who we’re not going after with this particular marketing campaign. If you’re over 35, you’re out. If you have a high net income, you’re out. If you don’t shop at Walmart, you’re also out. You’re left with a tiny fraction of the market but one that you specifically know and understand and can position too. But it would be a mistake to portray this as a story of just target marketing, because the reality is Gillette has a gigantic marketing budget and while this is one very small sales activation that was taking place across 2010, there was a major investment also taking place in advertising that looked like this.

That campaign targets the whole category. It’s using TV and mass reach media. It’s all about brand image and it’s a long-term campaign that’s the latest fair in a campaign that’s been running for almost a decade. What you see here is the power of both mass marketing and target marketing combined. Too often marketers get drawn into a debate about should we target everyone? Should we go after a smaller segment? The answer is of course you should go after both. You should do multiple target marketing campaigns not just the Madden campaign. At the same time in 2010, Gillette were also running campaigns to encourage Fusion users to shave their body to drive usage, and to change their cartridges in order to again drive increased purchase. Lots of small targeted campaigns matched with a much broader longer-term mass marketed campaign. The research is very clear: Field and Binet have proven this again and again with data. When you go for short term campaigns, you can target existing customer segments, you can go after new customers or you can go after everyone. The data is clear you should go after target segments, you should be targeted for the best return. But when you go after a longer term brand building campaigns, the best response you’re going to get is to go after everyone in the market and literally target the whole category. The lesson should be clear from the Gillette campaign. Too often we get caught up in this debate between should we target or should we go after mass marketing… the answer is you should go after both. The reality is that a well-run brand searching for maximum effectiveness is able to do mass marketing to build brand over the long term and target market multiple times for specific segments for sales activation.

Marketers just can’t resist pointless fads, which is why you can now buy your own […]

As the Better Briefs Project will reveal this week, 90% of marketers fail to brief […]

Sign up to our newsletter to keep in the loop with the latest Mini MBA news and never miss out on which brand is Mark taking aim at most recently.