Damaging brand image is rarely harmful because it matters so little

Marketers should worry less about their carefully crafted brand image and take more risks because, as brands such as Porsche, Volvo and Ben & Jerry’s show, consumers don’t care about what they stand for.

Ben & Jerry’s has started making dog food. Yes, dog food. And yes, under the same Ben & Jerry’s brand name. The new snack comes in pumpkin and cookie or peanut butter and pretzel flavours, utilising many of the same ingredients used in the company’s human treats. The dog snacks will be sold in the frozen food section of American supermarkets only a few feet from Ben & Jerry’s more established ice cream offerings.

“This is an opportunity for people to treat their dogs as they’re treating themselves when they grab a pint off the shelf,” a company spokesperson explained this week during launch festivities. The connection between human and canine snacking has never been stronger. The Ben & Jerry’s logo, the characteristic colourful packaging and cartoon imagery so associated with ice cream are now also found on dog food.

The similarity should, in theory, create significant tension. Basic brand theory states that, while a brand extension opens the door from an existing category into a new one, it also runs the risk of undermining the original brand if the new category, or subsequent new product, undermines it. That’s why you have to look very carefully at your big bag of Pedigree dog food for any clues that it is made by Mars. Chocolate bars and tins of dog meat simply do not work under the same brand.

Last month Porsche celebrated the production of its millionth Cayenne. When the big, brutal SUV was launched back in 2002, marketing pundits lined up to suggest that the company’s latest product was a big mistake.

For decades Porsche had stood for two things: sports cars and performance. The Cayenne was neither. Sure, it was nippy for a two-ton monster that was slightly larger than a semi-detached house. But that was hardly the point. The new car was about as far as you could get from the company’s heritage. Porsche’s entry into the SUV category would surely undermine its sports car credibility and perceptions of performance, and ultimately taint the brand.

Almost 20 years later the Cayenne has not only proven to be Porsche’s best-selling car of all time, it provided the company with enormous financial resources to redevelop its range of sports cars and – more recently – take a significant lead in developing luxury electric cars. The once-derided SUV has not only proven successful, it has emerged as the company’s greatest single commercial achievement. 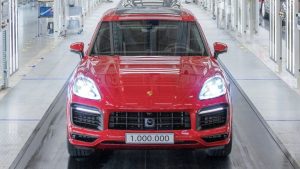 The millionth Porsche Cayenne, a model experts said would damage the brand

It’s a similar story for the great Swedish car manufacturer Volvo. Despite decades of history and its very Scandi brand associations of quality and safety, the company’s outlook appeared bleak back in 2008. The global economic crisis and rapidly declining sales meant that the brand appeared vulnerable. Many speculated that Volvo’s fate would be to follow Saab into the history books.

But then the company was sold, for a knock down price, to Chinese car manufacturer Geely. Once again, marketing experts suggested that something as high-end, heritage-filled and Swedish as Volvo would not survive an acquisition by a lower-tier Chinese refrigerator manufacturer from Hangzhou that had only started making cars a few years earlier. It was a last-gasp deal that would end up destroying Volvo after the eight successful decades that had preceded it.

Brands, it would seem, can take a lot more shit than most marketers believed.

Despite eventually shifting a significant proportion of its production to China – and general consumer awareness that Volvo is, to all intents and purposes, now a Chinese operation – the brand has flourished. In 2015 the company sold half a million cars for the first time in its history. Unit sales have continued to grow, with more than 700,000 Volvos shifted last year. Most of them in Europe.

Even more surprising, the Volvo brand now appears to be more Volvo-like than ever. The new models look like Volvos. The safety pedigree is all the stronger. “Our company is almost more Swedish with a Chinese owner,” explains Volvo Cars CEO Hakan Samuelsson. “And our Chinese owner loves that because they already have a Chinese brand.”

Back in July, online fashion retailer Boohoo faced its own existential crisis. An investigation by the Sunday Times found workers at a Leicester factory supplying Boohoo being paid only £3.50 an hour, barely a third of the mandated adult minimum wage.

The Government announced it was “coming after” Boohoo. Pundits predicted significant damage to the retailer’s brand and a likely hit to revenues and profit margins. Investors panicked because Boohoo’s main client was the uber-ethical millennial generation, who are so attracted to brand purpose and so repelled by brands bereft of it. The company’s share price halved in the 10 days that followed the Sunday Times exposé.

But then the strangest thing happened. Nothing. Despite all the reputation-shredding publicity, Boohoo’s brand retained all its original attraction. In fact, sales leapt by 45% during the ensuing six months and the company’s share price has been gradually recovering ever since. It is now worth more than Marks & Spencer. In fact, it’s worth almost double its more ethical and purposeful rival.

In the age of Trump, what people think of you is far less important than the more brutal objective of getting people to think about you.

My point in all of these cases – from dog treats to fashion crises – is that brands are significantly more robust than most marketers appreciate.

The business of brand management is very risk-averse. We use words like ‘tarnish’ or ‘damage’ whenever we see a brand deviate from the strict trajectory that its positioning and brand image dictate. And because marketers believe that brand is one of the most important assets at a company’s disposal, we assume that these discrepancies are potentially and immediately fatal mistakes.

But time after time, almost without exception, these deviations do not result in destruction. Quite the opposite in many cases. Porsche not only survived the Cayenne, it prospered because of it. China is the best thing to ever happen to Volvo. Boohoo has re-emerged entirely unscathed from its brush with the minimum wage. Brands, it would seem, can take a lot more shit than most marketers believed. And the impact of any indiscretion is nowhere near as serious or as enduring as many marketers would admit.

The consumer is not a moron

Partly this is the story of the rise of brand awareness – or salience, to give it its older and now trendier name. In the 1990s we taught brand managers that awareness was the ‘gateway variable’. You needed it, but then you had to move on to the far more important concept of brand image. Customers might know that the brand exists, but once that was established what did it stand for in their mind?

Over the past decade marketers have come to learn that, rather than just the gateway, coming to mind and being present in the consumer’s consciousness during decision-making is most of the house and the back garden too. Brand image is also important, but it occupies the passenger seat these days for most marketers. The superiority of salience reflects a growing awareness that, in the age of Trump, what people think of you is far less important than the more brutal objective of getting people to think about you.

Marketers also wildly overstated the importance and impact of brands on consumer’s lives. We forgot that most customers really don’t give a fuck about anything in a supermarket other than the final bill and how long it takes to generate it.

The only challenge is whether soft marketers can shake off their overstated sensitivity to brand image and obsessive focus on consistency.

Marketing academics, brand thinkers and most of the industry started banging on about brand relationships, lovemarks and golden circles. Wildly exaggerated concepts that made for great discussion, but which missed the quotidian role that brands actually played in the life of most people. We overthought things and made the cardinal error of assuming brands were as big for consumers as they were for us marketers.

Consumers were more prosaic and nonchalant than we gave them credit for. The idea of the same brand feeding you and your dog might fill marketers with panic attacks brought on by the potential brand contagion. (It’s chocolate. No, it’s dog food. No, it’s chocolate.) But most consumers appear unconcerned. They know its Ben & Jerry’s on both tubs, but they get the whole human-versus-canine distinction.

Similarly, Volvo still makes good, safe cars so who cares who owns it or where they are made? And the Porsche Cayenne looks great on my driveway so why worry about heritage? It’s terrible that Boohoo pay their workers so poorly and I certainly…ooh look at that halter top for eight quid, nice. Where’s my phone?

It turns out that brands and consumers are way tougher than most marketers realised. The only challenge is whether soft marketers can shake off their overstated sensitivity to brand image and obsessive focus on consistency, so they can manage their brands more appropriately and aggressively in the future.

We need to calm down. We need to take more risks. We need to act with the same casual insouciance as the consumers we target. We need to remember that the consumer is not a moron. That brands are little, little things. That brand image is not everything. And that the occasional indiscretion is unlikely to do any major damage.